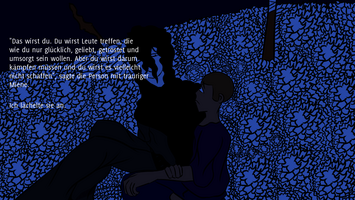 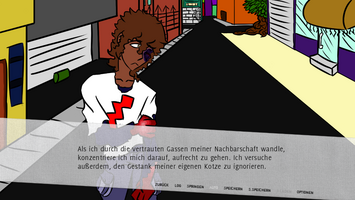 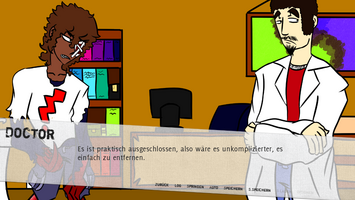 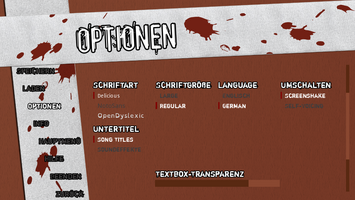 With the German translation finally implemented and uploaded, I'll be putting the mortem in this post (ha ha ha...).

This was my first time working with translation files, and I can't thank arty enough for being patient with me as I continued programming the game during NaNoRenO 2020+. Ren'Py, primarily being a Visual Novel engine, attempts to make translation as streamlined as possible. For most intents and purposes, it conveniently splits up each line of dialogue into its original language behind a comment for reference, and a new string for the corresponding translation.

This makes it easy for translators to keep track of which line they're working on.

As far as non-dialogue strings such as menu labels and buttons, this is what that typically looks like:

Of course, I wouldn't write a whole post like this just to say that things went smoothly. No. Things went very wrong.

You see, I hadn't anticipated some of the translated words to be so long, and also completely forgot that some of the "images" in the game were text displayables.

Ren'Py didn't pick up on these text strings at all, because they're images (which are actually just text). Asking arty to do these lines was simple enough, but the problem came with implementing them back into the game with the correct variable to reflect the language selection the player made. I could have simply changed them back into dialogue strings for the splashscreen, but then players would have to click to advance to the next line of dialogue.

After the player selects their language, the splashscreen proceeds to the next setting.

Remember, this was my first time working with two languages, so I wasn't sure how to make Ren'Py remember whether the player selected English or German.

My first thought was to add a $ persistent.language = "german" to the Deutsch choice. This worked! ... Until I got to the menus, where I turned the language from German back to English to test things out.

The button would still read "Erinnerugen" despite the rest of the game having been translated back into English. This was when I realized that  $ renpy.change_language wasn't tying it to any existing variable; I accidentally made a completely new variable that was only available if the player chose Deutsch the first time they opened the game.

So I changed it to config.language, as I had read in the documentation.

I probably should have read further, because while config.language seemed to work for the menus in the user interface, it was no longer working with the splashscreen...

I had already done a lot of work adjusting screens to accommodate for some longer words. The GUI I did for Distortion Nation is pretty stylized in that the titles and a lot of buttons are tilted at an angle, which while very cool, was a pain to align the first time in English.

For those familiar with Ren'Py, you'll notice that the string after game_menu is empty. Usually this is where the title of the screen goes so players know where they're at. They're not strictly necessary however, in case you wanted to use an image in place of it. In my case, I needed to make the titles tilted at an angle to fit better with the bandages in the navigation bar. Some of the screens with shorter names were fine using the default position, but ones with more characters in them would often appear above or below the bandage.

So keep all this in mind. Suddenly I need to do it again for German.

As mentioned before, config.language wasn't the correct variable to check for when applying the translation. It was only after two hours of work that I noticed preferences.language was what I was looking for.

Because of course that's near the bottom of the page.

This is what I had working before.

Suddenly, the splashscreen worked but the menus stopped when I changed everything to preferences.language. Or maybe it didn't stop working and I'm just bad at keeping track of script changes, which is highly likely. In either case, I was already exhausted enough and needed to bruteforce something.

With the German translation now working properly, I went to those translation files directly to mess around with the new lines.

That's hideous, but it served its purpose.

Please don't ask me how or why this works, I don't know either and I'm tired of looking at it.

I am very tired and gay and I'd like my cuddles with the moth gf. Thanks for coming to my TED Talk.

The Android version of the game will be in testing soon.

You are hurt, hang out with a necromancer, cuddle a moth girl.